Pimp and Hoes? by Syeda Campbell

Women in the 21st century are called many crude names like hoe, slut, whore, and much worse names. Men are usually referred to as pimps, players, “the man”. The difference between the man and women names that I listed is that the women names have a more negative connotation. Why is that? Is it because our society looks down upon women sexuality? Women sexuality has been studied since the beginning of time and has been tried to be controlled for even longer. But is there a real difference between the women sex drive and a man.
Women sexuality wasn’t always monitored by “society” women before the patriarchy social system they had a lot of power. Patriarchy is a social system in which men are in charge of the household, and other societal government. Patriarchy is a social system in which men are in charge of the household, and other societal government.  Countries like ancient Egypt held high respect for women. Queen Cleopatra held the crown for years and eventually did it independently. Women from native tribes who were Native American were also well respected. They were thought to be powerful because of the farming they could do. Their sexuality was also never questioned because they believed sex was a part of life and the more you did it the more spiritually healthy they would be. Patriarchy changed the way men viewed women. They thought that women should stay at home and be submissive to their husbands. They thought that women were not as strong as men or smart. Women were thought as to be second class citizens before the 1960’s and some people would argue that women are still being treated this way now. A change is coming!
Now in the 21st century women are taking back their sexuality. In shows such as Sex in the City and the B in Apartment 23 show women having casual sex just like men do and always have.

[i]The Victorian era created this stereotype that women were to only have sex to procreate and to please their husbands. Watching these shows deny this stereotype. These shows show women using foul language, wearing revealing clothes, and the “worst” having premarital sex. Why are these shows causing such a big fuss? Is it because women have been so afraid to express their sexuality because of societal high standards of the “vagina”? The world is made up of mostly a patriarchy social system. Yes, it still exists! This mean that men have a lot more power than women in today’s society. Men use the word whore and slut to describe a woman who has had multiple partners, but a man who has had multiple partners is call a player or a pimp. Even though player and pimp have negative connotations, other men use it to praise other men promiscuity. 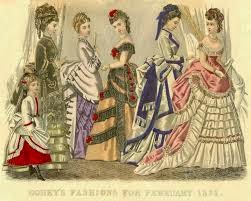 Now what’s the difference between a women sex drive and a man sex drive? Society! Society puts the vagina on a social pedestal. The vagina seems to be the ultimate prize.  A lot of coming to age films show a young man who placed a bet with his friends to deflower a girl, but the girl finds out about the bet. The guy ends of falling in love with girl and has to prove his love to her. Men have been putting a price on the vagina since the Victorian era. They’ve been trying to control women sex drive for even longer. [ii]In Somalia in other rural countries young women go through a tradition which the young women external genitals are completely removed. Most women get this procedure done when they are as young as five years old, but there have been some reports of babies being circumcised as well. The cutting is typically done be an elder women in their village. Cutting the clitoris is said to be done to eliminate women feeling of pleasure which they think can lead to them being promiscuous. [iii]The problem with this procedure is it can cause infection and even death from bleeding or sometimes childbirth. Women are looked down upon if they are not cut and are said to be undesirable. Though women are not cut here in America and some other richer countries, women are still being circumcised in a way. In countries that women get cut but don’t get it done are considered undesirable just like the women in other countries are considered to be whores if they have premarital sex. Men control women by women sexuality!

This can easily be changed. Before religion was brought to indigenous societies sex was very normal. Men and women were thought to be equal and sexual desire was high from both parties. The point of it all is that sex is natural. The penis is the key to the vagina. Society needs to stop over sexualizing sex and promote having safer sex. Men and women are equal so if the vagina is on a pedestal then the penis should be right beside it then!