Sex in Advertisement
Have we gone too far? Has advertisements lost its innocence? We as a society are afraid to talk about sex to our kids or parents, but we seem to not shy away from how sexual T.V and magazines ads are. I recently researched some of the most risky ads in the past 10 years and some are very subliminal and so are just damn right outlandish. Some may think that it is nothing wrong with the ads they see on TV, but what viewers need to keep in mind is who else are viewing these ads, why are these ads using sex, and could advertisers use something other than sex to sell their product.
Have you ever heard the statement that “sex sells”? Well now is the time to get disappointed because that phrase wasn’t invented in our century. In the late 1800 explicit images were already being used on objects. [i]1871 a cigarette company put a half naked women on the box. Their sales went through the roof. Other companies saw this as a good marketing strategy and caught on to the trend. In 1885 Dukes and Sons was one of the many companies that caught on to the trend and used it for their sales advantages. As the end of the 19th century came to an end, homosexuality increased which brought on the cult of friendship. During this era of heavy talks of same sex friendships came along this ad for ivory soap. It pictured a group of sailors taking a bath together with another sailor spraying them down with a hose. At this time was this kind of ad accepted? Maybe it was because of the innocence of same sex friendships, but this started the trend of using sex to advertise many everyday objects. In a 1939 Ad for Rockford Varnish and company they used a picture of a fully naked woman in a box describing how nice and shiny the finish will be. What does a naked woman have to do with Varnish? This was just one of many advertisements in the early 1900’s that used women’s sexuality for sales.
Sex is pretty much in every ad today. [ii]It’s in American apparel ad whom I will talk about later, it’s in food ads such as burger king and skittles, and even on car commercials. Why is sex used so much in ads? The answer is because sex is like the forbidden fruit. So many people find so much mystery in it. We as people are too afraid to talk about sex in public, but if we have something to hide behind like an ad then we are more than happy to talk about the most explicit things. What about the children? Children watch so much T.V and the younger they are the more they are likely to soak up a behavior like a sponge. Ads like burger king who promotes kids meals, but also uses a women who is about to deep throat a burger is kind of confusing to understand what audience they are trying to target. Another ad I saw was the skittles ad which showed a newlywed couple having sex and the husband ejaculates skittles all over his wife. Last time I checked, skittles are candy and most candy companies target children because they know they are the highest group to eat candy. Why would an innocent child need to be targeted through a sexual campaign? This makes no sense. 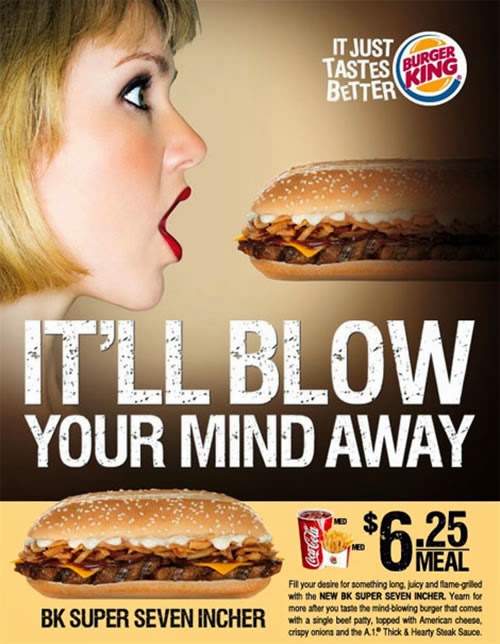 [iii]Let’s just say putting sex in ads isn’t a mistake. At least that’s what Dov Charney, the founder of American Apparel said. He said he knows sex sales and he wants people to take notice. He’s been judged and called many names for his provocative ads, but he still adds sex to his campaigns. He explained that fashion is nudity so why not incorporate it. There is even a website that shows a timeline of his sketchy ads. Though some people protest against his ads, his sales are still great so apparently he’s not quitting no time soon. So what now? Do you think companies are going to slow down anytime soon with their sexual adds? Probably not! Sex sales and if our society continues to shy away from talking about sex publicly, then sex is going to continue to be the forbidden fruit!