Columbus Hero or Villain? No More Lies! By Syeda Campbell

In the year 1492, Christopher Columbus sailed the ocean blue. He was on the conquest to prove that the world was not flat. On his journey he made nice with the native people in the Caribbean and America. He gave them food, shelter, and treasures. “LIES” let’s be real we all know that’s not how it happened. The explorer that we learned to love and admire was just another con artist trying to claim land and become wealthy. Christopher Columbus was on a trip to become wealthy not to explore. In fact he wasn’t even trying to go to America. He accidently found it while trying to go to Asia. His plan was to go to an Asian market which will make him wealthy. Instead he found a whole new nation of people who lives he would change forever. [1]When he arrived to the West Indies he “befriended” the people by giving them things that they didn’t have there, like weapons and a different kind of economics called slavery. These are things that the indigenous didn’t know about. Columbus spent most of his time here. This made the West Indian people believe that the Englishmen were friendly and it wasn’t a threat to them. Christopher and his men took some of the people and turned them into slaves. This was very common for the Englishmen, but new to these people. 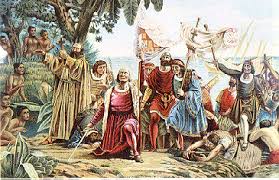 He saw higher opportunity and brought the slaves back to his country where he could profit from them. [2]Most of the people of the island Hispaniola were taken as slaves or left behind to mine for gold. Within 60 years after Columbus and his men landing on the island of Hispaniola only a few hundred was left out over 250,000. He made another trip and this time he found America or what was considered the new world. This was such a different place from back at home. Columbus and his men found a place that was filled with all kinds of economical opportunity. But was this “the new world” actually a place to discover? In actuality what they don’t tell you in elementary is that there were millions of people already there. This “new world” was really just another old world to millions others.
Elementary through high school, kids are taught that Christopher Columbus was this nice guy who made one wrong turned and discovered America, but his self and his men brought genocide. They brought corruption and ruined a culture that was going on for centuries. Let’s just say we give him the benefit of the doubt; he didn’t mean to wipe out basically 90% of people, found a new land that was never lost, or open the doors for other countries, does it change what happened? NO. Millions of people were still killed by diseases, starvation, etc. America was still raped by hundreds of greedy men, and these native people still lost their homes. So where are these natives now? Well they are still a few reserves in the western United States. They are also among the poorest minority group. If people are educated about our native people then it’ll keep their legacy alive and not dishonor them by giving them three pages out of our text books. So my last question is; do you think Christopher Columbus is a hero or a villain?